THE DIMLUX EXPERT  MKII IS A IMPROVED SERIES OF COMPLETE FIXTURES INCLUDING THE ULTRA OPTICS REFLECTOR.

The new 1000/1250W MKII fixture has an increased boost of 1200W, the highest on the market. Outperforms any 1000W fixture and even any 1250W (DE) fixture on the market in terms of PAR output, efficiency and PAR maintenance.
To make optimal use of the increased boost a newly developed DXO Output HPS 400V 1000/1250W DE EL bulb has been installed which has superior properties. Normal 1000W bulbs degrade rapidly above 900W in PAR maintenance. Super long-lasting – stays 95% efficient after 10000h operation

When paired with the included Ultra Optics 98 reflector that is 98% reflective Miro Silver, the fixture produces a whopping PPF of 2107 μmol/s at 1000W. This light has eight dimming levels including an overdrive feature that boosts the PPF to 2528 μmol/s at 1200W.

The Ultra Optics 98 reflector was designed on the Single Bounce Clear Sight (SBCS) principle. This means EVERY photon will only “bounce” once with the reflector before heading onto your canopy. The provides longer lamp life and a cooler operating temperature. A 50mm socket on top of the hood allows air to passively rise above the fixture that can also be extracted with an exhaust fan. This leads to LOWER COOLING COSTS.

The First Choice for
Professional Horticulturalists

The new developed DXO HPS 400V 1000/1250W DE EL bulb is the best performing 400V EL bulb available. It’s the only bulb specifically designed for dimming AND boosting which results in the highest performance at boost without the PAR deprivation.  It’s targeted for professional horticulturalists in the commercial food growing industry, which is largely down to its ability to pile on weight during the bloom phase. The extremely high PAR output and high PAR maintenance provide the best in class grow light and set a new benchmark for 1000W 400V EL bulbs.

HOW DOES IT WORK?

The DXO HPS 400V 1000/1250W DE EL bulb is a single-spectrum bulb with the most plant-useable light output of just about any 1000 Watt lamp on the market. The bulb produces light mostly in the orange/red part of the spectrum for heavy flowering however, it does produce some light in the blue part of the spectrum making it suitable for vegging. It has been specifically designed to make the most of your HPS (400 Volt / 1000 Watt) electronic system with boost where it will produce more plant-useable light photons, of a better spectrum, than any other 1000 Watt bulb available. 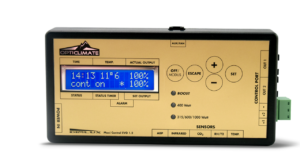 Control the Dimlux fixture with a Maxi Controller. 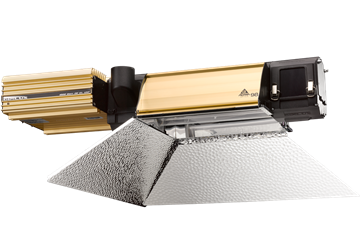 Monitor the evaporation of the crop with a plant temperature camera.
Details